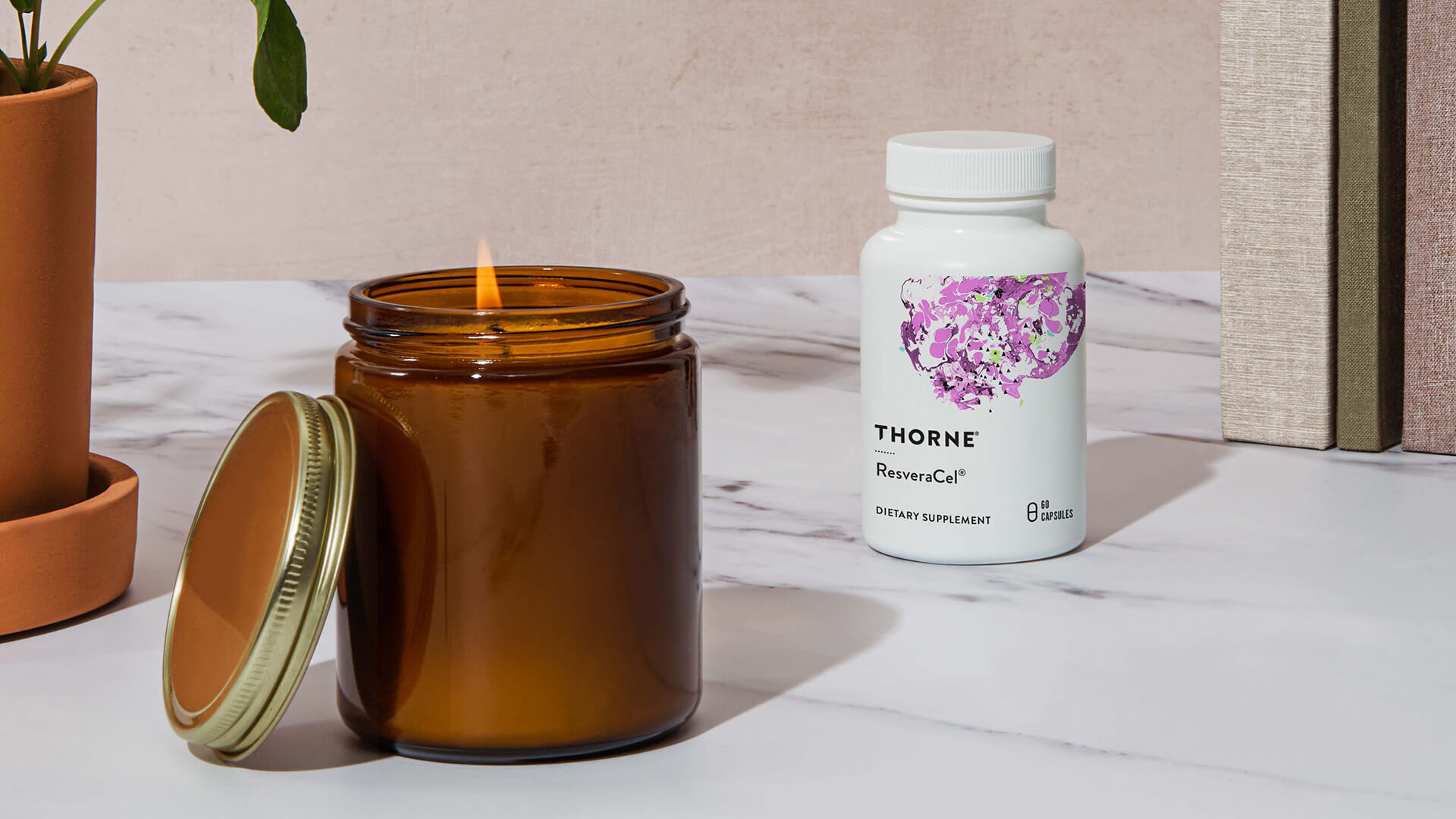 Exciting developments in the area of healthy aging are constantly being announced. You’ve probably heard about one of them – resveratrol – a natural substance found in, among other things, red wine. Resveratrol mimics the effect of calorie restriction, and it’s believed to support healthy cardiovascular aging.*

A second "healthy aging" substance is nicotinamide riboside (NR), which works at a cellular level, where it supports multiple functions of the mitochondria, helping to regulate cellular aging and cellular energy production, and providing positive nutritional support for individuals who have metabolic syndrome.* Thorne's ResveraCel combines both substances – resveratrol and NR – plus additional cofactors in one formula.

Resveratrol has shown promise in clinical studies by modulating the effects of several age-related conditions.* It is considered by some researchers to be the substance in red wine that explains the "French Paradox," an epidemiological observation that the French, who eat more saturated fat and consume more alcohol than citizens of many other countries, have a lower rate of cardiovascular disease.

Resveratrol's support of the body's normal inflammatory response and its health-promoting effect on blood vessels partly explains this phenomenon.* But resveratrol also activates the sirtuin group of proteins (the proteins involved in regulating cellular processes including the aging and death of cells).* In fact, one study showed that resveratrol is the most potent natural activator of the sirtuin proteins.*

The resveratrol in Thorne’s ResveraCel is trans-resveratrol – not a diluted plant extract found in many resveratrol products on the market. The story of NR is also the story of NAD+ (nicotinamide adenine dinucleotide), a coenzyme found in all living cells. Adequate amounts of intracellular NAD+ must be present for the sirtuin proteins mentioned above to function optimally, and for the mitochondria to perform their crucial cellular function.

But the amount of NAD+ in the body declines naturally with aging, with a corresponding decrease in certain enzymatic activities.3 As the most efficient direct precursor to NAD+, NR directly stimulates NAD+ production for use by the sirtuin proteins and other enzymes, as well as for mitochondrial energy (ATP) production.* NR also offers fundamental support for multiple mitochondrial activities – from cellular energy production to the regulation of metabolism and cellular aging.*

ResveraCel also contains quercetin and betaine. Like resveratrol, quercetin enhances SIRT1 activity.*1,2 Research has shown quercetin not only slows the breakdown of resveratrol in the body, it also acts as a potent antioxidant and is synergistic with the activities of resveratrol.*4-6

And ResveraCel contains quercetin as a phytosome complex – the quercetin is bound to sunflower-sourced phospholipids to enhance its absorption.* Betaine provides premier support for methylation, a crucial body process that contributes to the health of the heart, blood vessels, brain, nervous system, and liver.*

Betaine also promotes the metabolism of homocysteine and provides positive support for other metabolic functions associated with metabolic syndrome.*

Aging is a fact for every baby boomer and Gen-X’er. But we can do many positive things to support good health as we get older. Making ResveraCel part our daily supplementation is one of them.