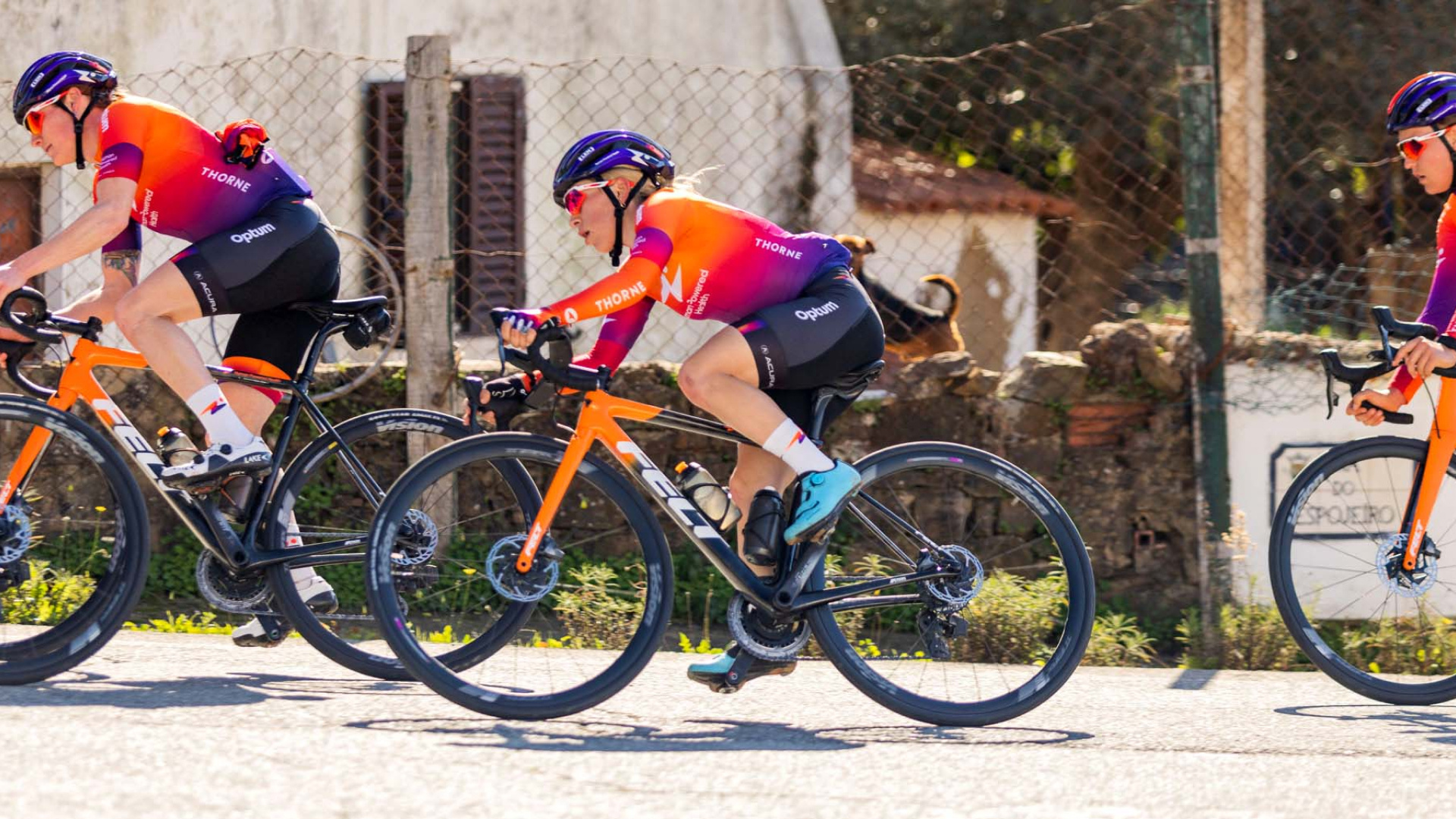 Thorne’s latest team-up is with Human Powered Health– an elite professional cycling team of young men and women who were asked to be part of a mission going beyond just podium finishes at some of the biggest races of the year (including Tour de France Femmes Avec Zwift). As so eloquently stated by their managing director, Charles Aaron, “Human Powered Health represents more than racing, more than athletics. It’s about reminding people they have more power over their health than they think. We want to support individuals, mind and body, and use our platform to inspire them to take small and simple steps toward greater health and well-being.”

This sentiment is so fitting with Thorne’s goals that we had to join their peloton.

With our partnership with HPH, like Thorne does with other elite athletes and teams we work with closely, we start with our basic mantra: Test, Teach, and Transform. To reveal each athlete’s personal best, Thorne and the Human Powered Health’s team doctors start with a comprehensive list of blood biomarkers that are important for a young, healthy person to have checked annually, as well as several known biomarkers to watch for in competing elite athletes, and especially cyclists.

Cycling is a sport that many people engage in later in life because it's easier on the hips, knees, and ankles than running. But to be both young and elite takes a blend of coordination and balance, strength, power, endurance, and the ability to assimilate millions of internal proprioceptors and external stimuli. Meanwhile, a cyclist maneuvers a small carbon fiber frame touching the ground at only two points, inches away from riders positioning for a drafting spot, all while flying 45 mph downhill. It takes incredible ability to consume and move oxygen through the body, clear accumulating lactate, coordinate contracting muscles to maintain wattage, and stay hydrated and fueled for a multiple-hour event. Needless to say, a cyclist’s body needs to be at 100 percent.

The Human Powered Health team met for their pre-season training camp in southern Portugal the last week of January. Thirty cyclists (12 females, 18 males) had blood drawn the morning before a team ride. The following are highlights of several of the main and interesting findings, plus a discussion of how we hope to ride behind these athletes through the next few years and support them from the inside out.

The team checked a CBC with differential to get a baseline look at red blood cells (RBCs), white blood cells (WBCs), and platelets. These values give the athletes insight into the quality, quantity, and health of their red blood cells, which are necessary to facilitate oxygen transport to active skeletal muscles. Anemia – having low hemoglobin – is common in endurance athletes and even more common in women and can be evaluated with RBC values. The team also evaluated their vitamin B12 and folate levels. Serum folate is important to monitor in athletes who have a high red blood cell turnover rate due to training stresses. Overall, early in the season, the team looks solid with values in the clinically normal range for these biomarkers. The team doctors are recommending athletes support their RBC health with Thorne’s Multivitamin Elite and Super EPA and will continue to monitor their levels quarterly.*

Because slightly lower WBC in aerobic endurance sports can be a common response to training, cyclists should be monitored because a chronically low level can indicate overtraining. WBCs are a way to evaluate the body’s immune system functionality and can change from day to day. Several team members had just below clinically normal levels of values and will focus on eating fruits and vegetables with high vitamin C content and supplementing with FloraSport for immune support during travel needs this year.*

Because several of the cyclists are vegetarian, and because iron status is commonly lower in female endurance athletes, the team checked iron, ferritin, and total iron-binding capacity in every member. Ferritin estimates how much iron is stored in the body. Low ferritin can limit the body's ability to make new red blood cells, which can lead to anemia, or limit the formation of higher concentrations of blood often needed in athletes. Although values are clinically normal in the entire team at this time, several athletes have chosen to support their iron level with Thorne’s Iron Bisglycinate, and then determine their historical bloodwork values over a season.

To determine how the team members tolerate the carbohydrates they consume for fuel, glucose, HbA1c, and insulin are measured. Everyone’s levels are within clinically normal ranges, suggesting their bodies are primed to utilize the sugars they consume on and off the bike. Better yet, it means they are currently at low risk for insulin sensitivity or prediabetes. For athletes seeking an option, Magnesium Bisglycinate supports insulin sensitivity for healthy blood sugar levels.*

As part of a comprehensive metabolic panel, total bilirubin, AST, ALT, and Alkaline Phosphatase (ALP) are biomarkers that reveal liver function, which is so important for body detoxification during training, although these biomarkers can also indicate poor diet, excess circulating fat, or long-term liver damage when they are chronically elevated. A mild elevation of bilirubin is common in athletes, especially after physical exertion, because bilirubin is formed when red blood cells break down. Some team members had a slightly elevated AST, which can be typical for an elite athlete up to seven days post-exercise, and the team was in the middle of a training camp. Overall, the team will keep an eye on these values.

Albumin and total protein are analyzed as part of the comprehensive metabolic panel. Albumin helps hold fluid in the body, so when it’s low, it can indicate protein deficiency, poor nutrition, a weak liver, or kidney function issues. The team was normal in these values and is focusing on protein timing post-workout and have started drinking RecoveryPro before bed.

As part of any blood test, it's both inexpensive and revealing to measure cholesterol levels and analyze trends over time. In addition, team members also had Apo B – the protein in bad LDL cholesterol that helps these particles bind to and clog blood vessels – and Lp(a) – a variant of low-density lipoprotein and an independent risk factor for heart disease – measured. The main concern if these values were elevated would be the risk of plaque buildup and changes in blood vessel elasticity, which would adversely affect blood pressure, stroke volume, and cardiac output, ultimately decreasing athletic performance. The team doctors note that the team members’ levels are not a concern at this time.

Serum sodium, potassium, chloride, calcium, magnesium, and bicarbonate are all measured and, not surprisingly, are normal in everyone. These athletes now regularly drink Catalyte while riding to maintain proper electrolyte balance during exercise.* The team will measure RBC magnesium at the next blood draw because it is a better indicator of magnesium status and an important biomarker athletes need to maintain at a normal level. For any cyclist showing an abnormal magnesium value, which can be due to a variety of factors, the athletes will have a supply of Magnesium Bisglycinate to drink in the evening when they need it.

Cortisol and CRP are two key biomarkers that reveal, respectively, physical, mental, or emotional stress or inflammation levels. Because most team members traveled through multiple time zones to get to camp, it's hard to tell what their baseline levels actually are for cortisol. It's also difficult with only a single slightly elevated cortisol value to determine if a serious issue like overtraining is a concern. The team doctors will send a Thorne Stress Test to several team members to measure their cortisol level throughout the day for better evaluation.

Even though these athletes spend so much time outside, they train in northern latitudes, they are covered in clothing head to toe (including sunglasses), and they lather up with sunblock, all of which can decrease the level of vitamin D. So not surprisingly, vitamin D was clinically low (< 30 ng/mL) in 11 team members and below the level suggested for athletes (> 40 ng/mL) in 20 team members. Of the team members who had a normal level, they reported supplementing with Thorne’s Vitamin D-5000 for its support for producing lean muscle mass and muscle strength, as well as supporting brain function, cardiovascular health, and immune function.* The team will use this supplement in their daily regimen and retest quarterly with Thorne’s Vitamin D test and are well aware of vitamin D’s importance to athletes.

Team members also had thyroid stimulating hormone (TSH), DHEA-S, free and total testosterone, estradiol, and sex-hormone binding globulin (SHBG) measured. Most of these are sex hormones, and each plays an important role in energy/fatigue, muscles, body composition, mood, menstrual cycle, bone, strength, and sleep. An objective was to establish a season baseline, as well as tracking if an injury were to occur. Currently, the team looks healthy and well.

There are many limitations to single timepoint bloodwork, and we are working with the team to continuously retest throughout the year, just as they do for UCI anti-doping guidelines. The team will only take Thorne’s NSF Certified for Sport products because they are certified compliant with the USADA and WADA lists for banned substances.

For what is typically considered an individual sport, the Human Powered Health cycling team is on fire, working closely together and already posting podium finishes at multiple races on this year’s circuit. Which is not surprising given the team is comprised of Olympic medalists and national champions in multiple disciplines. Thorne is here to support the team, the staff, and the sport of cycling, and we are excited for what’s to come!