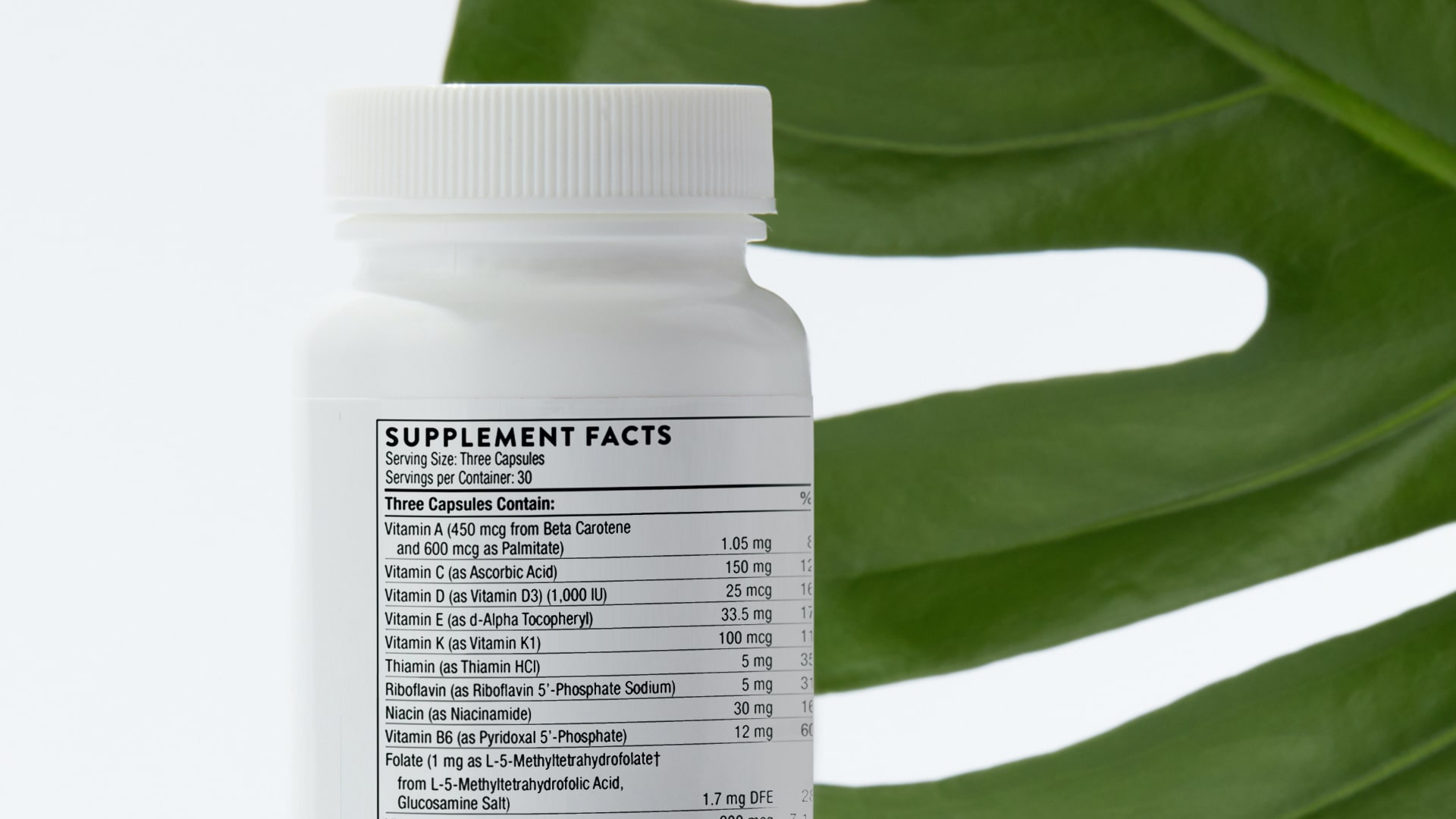 Beginning in January 2020, supplement companies will be required to comply with several new FDA labeling regulations. At Thorne, we decided to get ahead of the game. So, along with our new rebranded labels, you will also see changes to the way many of the ingredients are listed on our product labels. This blog will help you navigate these changes, which admittedly can be a bit confusing.

In most cases, the actual product formula will not change, but with the required changes they could look like they have. It might look like there is more or less of a certain ingredient, when that isn’t the case at all. Or you might not know how to interpret the amount of a particular ingredient because it’s listed in different units than you are accustomed to. For example, if you’re like me, you’ve always referred to vitamin A in International Units (IUs), so you’ll have no idea what that translates to in micrograms (mcgs). Hopefully this blog will help.

Let's look at some of the changes – starting with the way some of the vitamins will appear on the label. In the case of our newly branded labels, most of these changes have already taken place.

The following chart summarizes the conversions for vitamin A, beta-carotene, vitamin D, vitamin E, and folate: 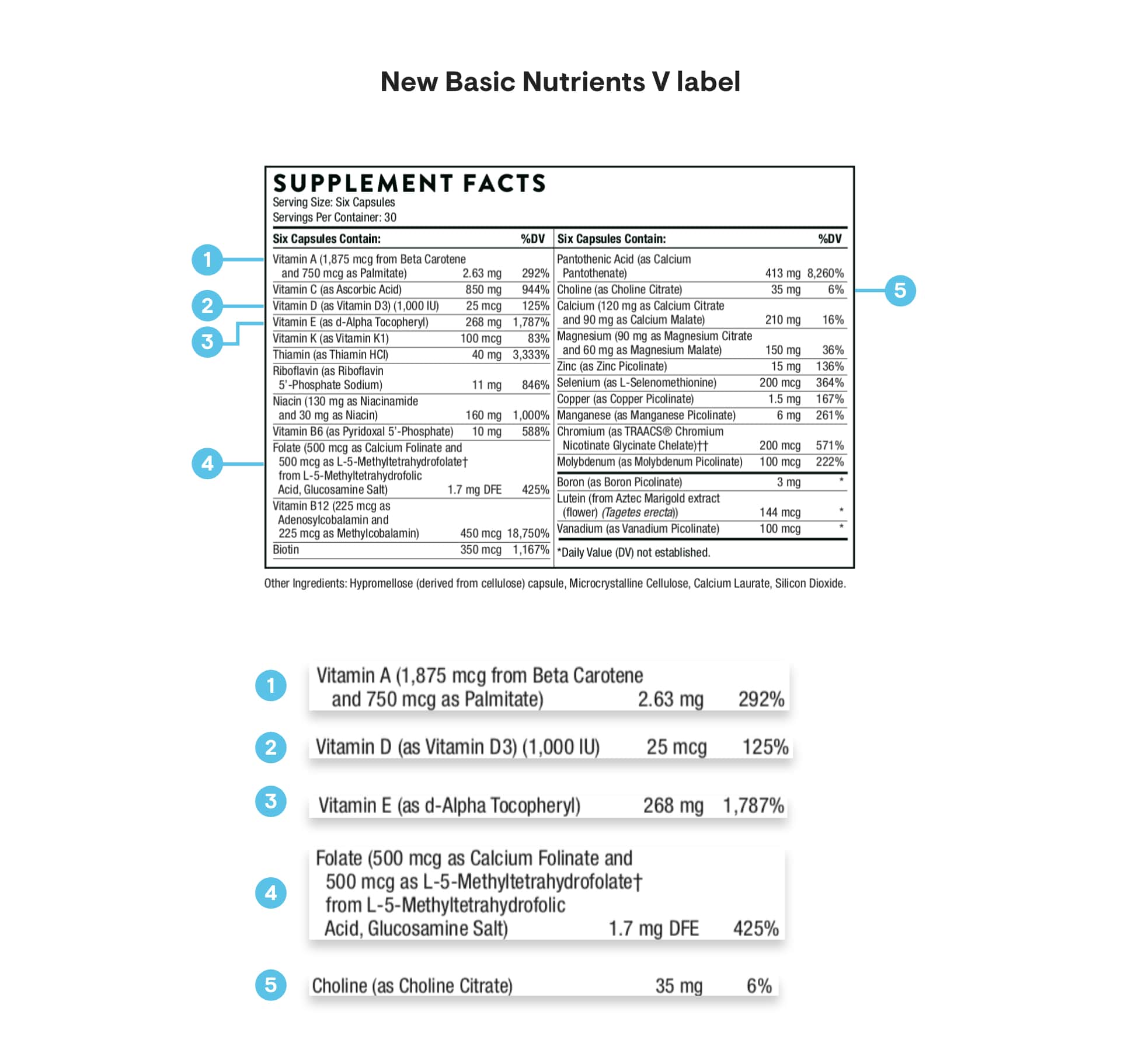 What are some of the other changes you might see?

Other changes in the Supplement Facts Box might not be so obvious, but are still important to keep in mind and help improve ingredient transparency. Certain nutrients that occurred naturally in a product or one of its ingredients will now appear on the label. These four nutrients are:

Iron, Calcium, Potassium and Vitamin D: These represent nutrients that are found naturally in a product, such as a protein powder, but that we don’t actually add to the product as ingredients. If one serving of one of these nutrients in a product contains 2% or more of the FDA’s Reference Daily Intake (RDI; listed on the label as %DV), then it must be listed in the Supplement Facts Box. For example, going forward you now might see a listing for iron in one of our protein powders. If the iron is listed without the source of the iron – for example, simply being listed as iron, and not as iron bisglycinate – then that means the iron is naturally occurring in the protein powder or the flavoring. Our MediClear® suite is an example of this. The Supplement Facts Box on each MediClear product will now list iron as a dietary ingredient because iron occurs naturally in the protein powder and flavoring.

Ingredients not added for therapeutic value: Another example of the new FDA regulations requiring calcium, iron, potassium, and vitamin D to be listed is whether or not the ingredient is being included in the formula for its therapeutic value – calcium as calcium undecylenate In Undecyn® or calcium in Calcium D-Glucarate, for example. The calcium is not in either product as a calcium source to help build bones; rather, it is present to make the material it is bound to more stable. Nevertheless, if the amount of calcium in one serving is 2% of the %DV or more, it will be listed on its own line in the Supplement Facts Box with the claimed amount.

Other ingredients are no longer required to be listed separately: Some substances that used to appear in the Supplement Facts Box are no longer required so they have been removed from having their own separate line. One example is chloride in the Thorne products Glucosamine Sulfate and AR-Encap – the chloride is part of the glucosamine sulfate-potassium chloride complex. Although chloride is still in the product as part of the potassium chloride that is necessary to stabilize glucosamine sulfate, it is no longer listed as a separate ingredient in the Supplement Facts Box. This is quite helpful because listing chloride on the former product labels made it look like chloride was a therapeutic ingredient.

The FDA has established new Percent Daily Values (%DV) for some nutrients. What this means is that the FDA has determined an increase or a decrease in the daily recommendation of a particular nutrient is necessary to maintain health. Therefore, even if the amount of a nutrient in a formula does not change, its %DV might change. The RDIs for nearly all nutrients have been revised by the FDA – some more than others. Below is a chart of the FDA’s new RDIs compared with the former ones.

Comparison chart of former RDIs versus new RDIs for adults and children 4+ years:

We trust that the above information will make it easier for you to interpret the Supplement Facts Box throughout our entire product line as the new FDA labeling regulations begin to be implemented in the market place.