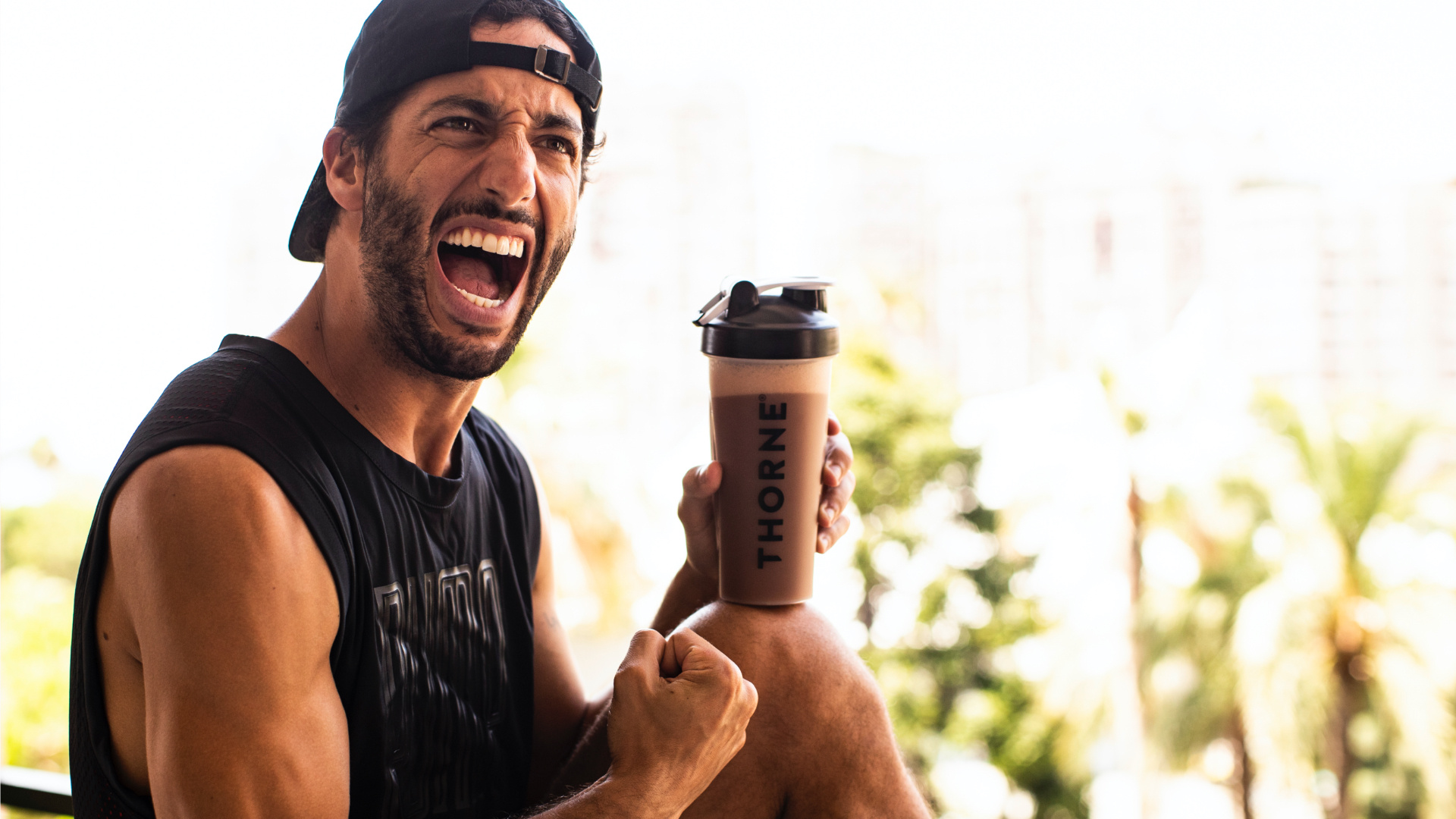 With his laidback persona, sharp wit, and proven race-winner ability on the track, Daniel Ricciardo is redefining the modern racer. Now he’s redefining his health with Thorne.

Even though it seems all they do is sit for a living, F1 drivers are actually some of the most physically and mentally fit athletes around. The drivers require an intense exercise and training regimen to ensure their body is capable of handling the intense demands of the Grand Prix.

The Elite Athlete Behind the Wheel

“That’s the hardest thing with our sport, because no one can [really] relate. People can go play basketball for an hour and understand how hard it is and how physical it is. They can go play football or something else,” Daniel explained.

“But no one can sit in a Formula 1 car and know what we go through. Trying to educate fans and people, trying to get respect hasn’t always been easy. But it is what it is. I understand why people don’t get it, it’s because they can’t experience it, so it’s hard to comprehend.”

Daniel describes it as requiring a jack-of-all-trades approach to fitness.

“It’s a combination of everything. I don’t think we’re elite in any one thing. Maybe our neck strength is  elite,” he said, laughing.

“But we have to be very good in cardio. The races are an hour and a half to two hours long and our heart rate is probably at 140 the whole time, so it’s important to have a good base-cardio. And that also helps your concentration through the race, so it goes hand-in-hand.”

Beyond good cardio and mental concentration, F1 drivers must also withstand the intense forces they experience from the speed – which requires a strong core.

“We need a lot of power for the forces we get through, the G-forces in our core, neck, glutes, and lower back. It’s really quite sharp hits going through a corner. You might get two seconds of a high load and then a release and a bit of a break on the straight and another few seconds, so we do need power for that. But we can’t get big, it’s a lightweight sport so you really have to maintain around 70 kilos throughout the whole year, which is about 153 pounds,” Daniel said.

To keep up with the intense demands, not to mention the constant travel required for the F1 circuit, Daniel shared with us how he stays in shape and how Thorne supplements have helped.

“Really a lot of the fitness is accomplished before the season begins, because once we get going in the season, you’re bouncing around from country to country and not getting much time to yourself, let alone time to train,” he explained.

“So really during the season, it’s just about maintaining and trying to work on your recovery, and that’s really your fitness. In a typical week when we have a race, and then another race the following week, Monday (after the race) would be a day off, probably just some stretching. And then Tuesday, maybe a little bit of training, but Wednesday you’re traveling again. The racing is keeping us fit. The racing is our best form of fitness hands down. If we’re racing often, that’s giving us all of the fitness we need.”

“Thankfully we have amazing chefs that work in the team, so we’re able to pretty much get what we want, when we want, which is a huge benefit. When eating leading up to a race you try to keep it pretty clean, but definitely you eat more on a race day. Just trying to have a balanced diet is really the main thing.”

But what about when drivers need something to fill in their nutritional gaps? That’s when Daniel turns to Thorne – especially when it comes to supporting his immune response.

“My first batch of Thorne products was actually the Multi-Vitamin Elite, the AM and PM. I remember having these for the first time… and I remember specifically because we had quite a few tough races, traveling a lot and it just caught up to me and I was just feeling flat. I was going to the U.S. to do a trip and I needed something to pick me up and fight off the immunity issues I was struggling with that year. I felt like the Multi-Vitamin Elite was my lifesaver at that point,” he said.

“That was the first Thorne product I used, and I still use them. They are my favorite because our immune health is the most vulnerable thing when we’re traveling – with so many airports and airplanes and so many different cultures and environments. And the chance of us getting something makes us very vulnerable.”

“But we use the Thorne powders as well. The Magnesium, that’s good for sleeping. I can’t say that I’ve tried them all yet, but I certainly love the products and the quality. And I’ve had proper results with them, it’s not just a placebo.”

Getting a Good Night’s Sleep

Because of the high pressure involved in racing, sleep is of the utmost importance for Daniel. The traveling and jetlag involved in the F1 circuit certainly doesn’t help.

“I’ve found it challenging, because I’m not the world’s greatest sleeper, and you try to adjust to different time zones a little bit before, trying to get to sleep a little bit earlier each night before you travel to a big time zone change,” he said.

Making sure he gets the right amount of sleep is an important aspect of his overall routine as an athlete.

“Sleep is important, no matter what you’re doing in life. You feel the effects of not getting good sleep, and you can probably get away with a night or two of poor sleep, but eventually it catches up on you,” he said.

“It’s something I’ve worked on. Now I travel with a pillow and an eye mask, and Michael, my trainer, is also trying to get me to sleep with ear plugs, which doesn’t always work because I like falling asleep listening to podcasts, but it’s little things that have certainly helped. And then some Thorne supplements. Magnesium, I think that’s quite beneficial, so I’ll take that in the evenings,” Daniel said.

And getting that good night’s sleep is what helps Daniel stay so calm and collected when it comes to race day.

Everyone at Thorne is excited to support Daniel in his race for the Formula One World Championship. Be sure to check out Daniel’s personal collection and shop for the same Thorne NSF Certified for Sport® supplements used by the Formula One’s most charismatic driver.