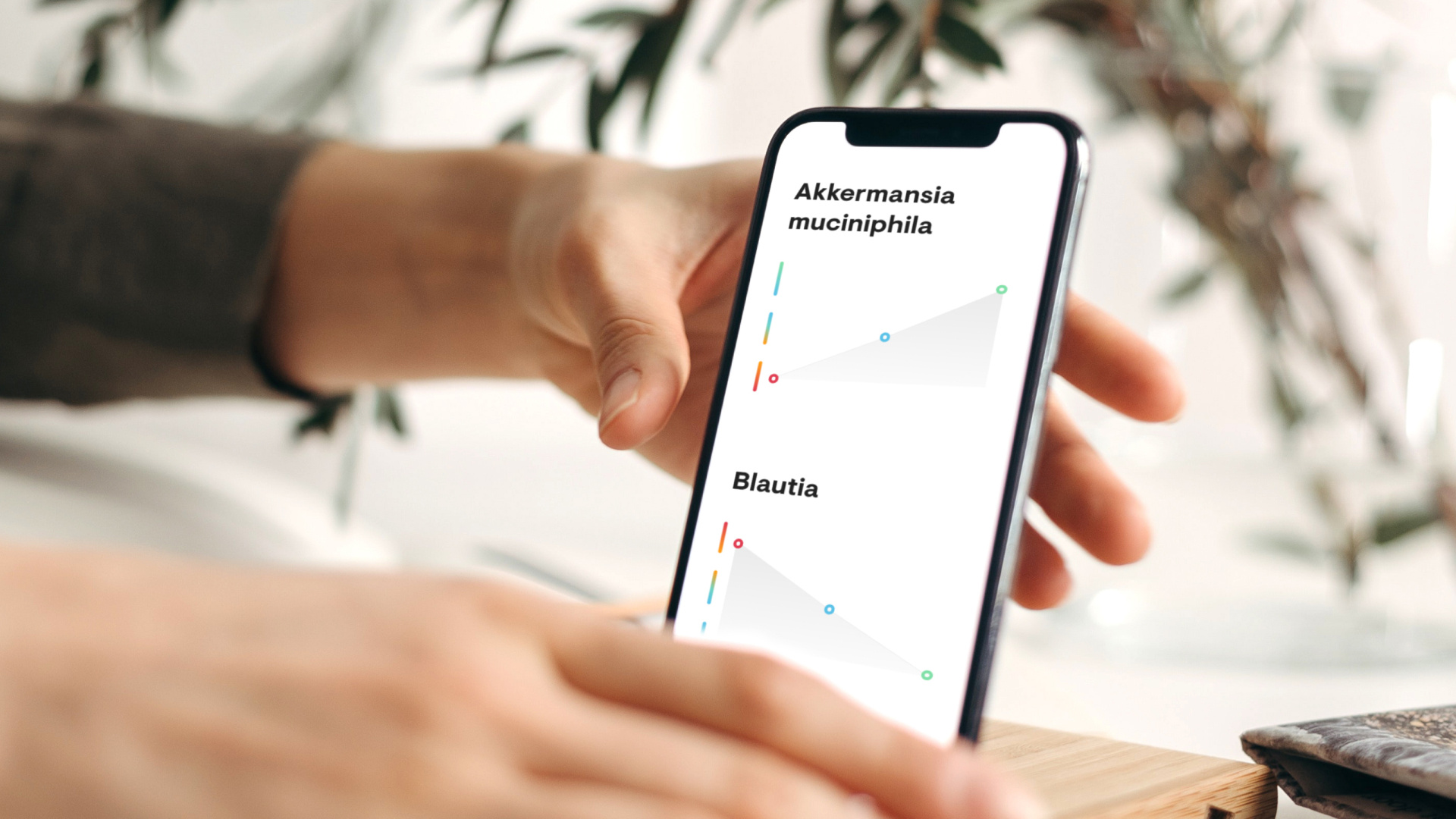 The study1, published in the June 2020 issue, focused on adults with irritable bowel syndrome (IBS), the most prevalent functional gastrointestinal (GI) disorder worldwide and the most common reason for a referral to a gastroenterologist. IBS affects 12 percent of the adult population worldwide, with two-thirds of cases being women.2

IBS is clinically defined by recurrent episodes of abdominal pain associated with alternating bowel habits. Although there are no diagnostic blood biomarkers, the pathogenesis is described as altered gastrointestinal motility, visceral hypersensitivity, post-infectious reactivity, brain-gut interactions, alteration in the fecal microbiome, bacterial overgrowth, food sensitivity, carbohydrate malabsorption, and intestinal inflammation.3 Unfortunately for those who suffer, there is no definitive treatment for IBS, and current management focuses on symptom alleviation rather resolving the root cause. Therefore, the Onegevity team’s objective was to demonstrate the unique metagenomic signatures across IBS phenotypes and validate whether metagenomic-guided interventions could lead to improvement of symptom scores in adults who have IBS.

Eighty-eight adults participated. Sixty were adults with IBS: 21 with IBS-Constipation, 23 with IBS-Diarrhea, and 16 with IBS-Mixed. Ten adults had Inflammatory Bowel Disease (IBD), 13 had other GI-related symptoms, such as fungal overgrowth, small intestinal bacterial overgrowth (SIBO), or leaky gut, and five were healthy controls. Sixty were female and 28 were male, and ages ranged from 36 to 52. All collected a baseline gut microbiome stool sample using the Gut Health collection kit, which underwent whole-genome shotgun (metagenomic) sequencing. This baseline microbiome assessment was used to assign a personalized intervention formulated from the nutrition-gut bacteria interactions within the Onegevity Health Intelligence database.

Before starting the intervention, all participants completed a 9-point symptom severity questionnaire based on the Rome IV criteria. The average symptom score of an IBS individual was 160 (IBS-C: 180.1; IBS-D: 111.4; IBS-M: 203.6) compared to the average symptom score of 20.8 from the healthy controls. Some individuals self-reported as healthy despite having symptom scores in the 100s, thus the symptom scores helped provide some an objective measure in categorizing the participants based on their symptoms rather than depending solely on subjective, self-reported data.

Individuals were given a 30-day personalized and targeted intervention that included diet, nutritional supplements, prebiotic/probiotic, and lifestyle recommendations. Nutritional supplements included a variety of digestive enzyme blends, various strains of probiotics and prebiotic fiber blends, a proprietary mix of glutamine, aloe, curcumin, and Boswellia, and other functional ingredients to support GI structure, function, and microbial population. Some had zero, one, or more dietary styles, and some had one to three supplement combinations. In total, there were almost 40 unique intervention combinations in the trial. All individuals with IBS followed a GF and DF diet during the intervention (even if they were previously following one) in addition to other potential diet recommendations. Following the 30-day personalized intervention, a second Gut Health microbiome test and a final symptom questionnaire were collected.

The same symptom questionnaire was collected on Day 15 (of 30) during the intervention and included compliance questions. Across many symptoms, 100 percent compliance to the supplement regimen showed the greatest improvement in symptom scores. 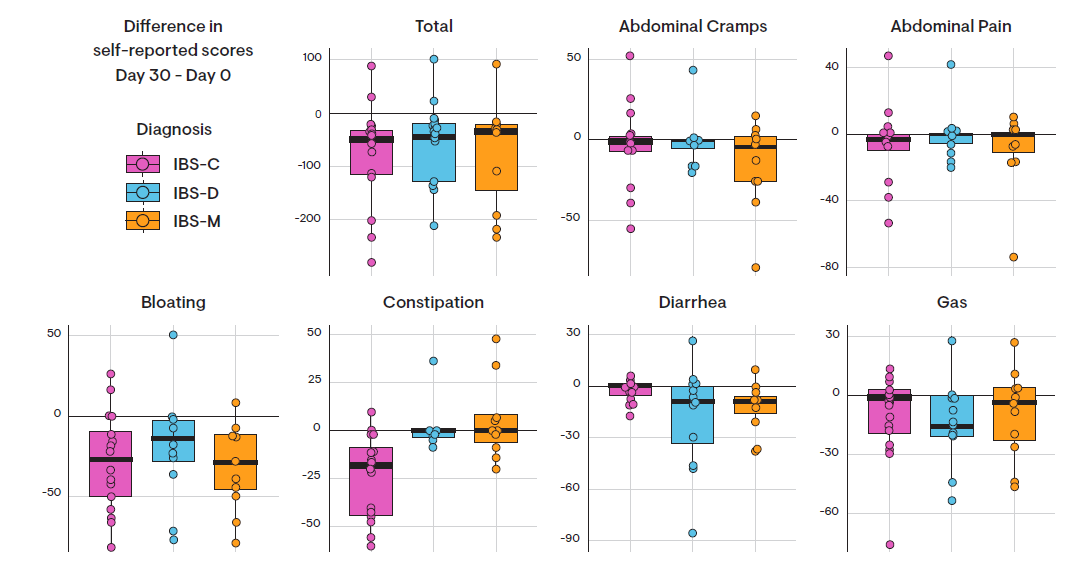 Statistical analysis found dietary intervention (GF, DF) alone did not lead to significant reductions in symptom scores, and there were no significant differences between symptom reduction for those previously consuming a GF, DF diet compared to those who switched to this diet for the intervention. Adults who followed a DF diet before enrollment also showed a significant reduction in total symptoms (decrease average, 91.8) after using their personalized supplements compared to those new to the DF diet interventions (decreased average 71.4, P = 0.0004). These findings were similar to the GF diet.

Symptom improvement was not linked solely to dietary interventions. Most prebiotics, probiotics, and supplements in the protocol worked to a similar degree, although arabinoglactans and the strain of Bacillus coagulans both showed a much higher decrease in constipation scores than other functional ingredients (P = 0.0001, 26.8 IBS points and P = 0.0009, 23.3 better on average, respectively). The proprietary mix of glutamine, aloe, Boswellia, and curcumin did not work well with constipation but performed better than other options for diarrhea symptoms (P = 0.00484, 15.2 points better on average).

This trial demonstrates metagenomic signatures in the taxonomic and functional pathways of the gut microbiome in patients that can be used to distinguish the IBS subtypes. The predominant taxa identified across all subtypes were common gut microbiome species, including Bacterioides species such as B. vulgatus, B. fragilis, B. cellulosilyticus, and B. dorei, as well as Faecalibacterium prausnitzii, Akkermansia muciniphila, Eubacterium rectale, and Anaerostipes hadrus.

Participants who were diagnosed as having IBS-C or who had high constipation risk were found to have gut microbiome profiles with significantly increased levels of Pseudomonas and Bacteroides thetaiotamicron. Meanwhile, they were found to have microbiomes depleted of Paraprevotella, as well as significant signatures of Fusobacterium nucleatum and Megamonas hypermegale.

Many of the species that increased post-intervention across all IBS subtypes were microorganisms commonly found in the gut microbiome, including Ruminococcus bicirculans, Akkermansia muciniphila, and Adlercreutzia equolifaciens. The top taxa that decreased the most across all IBS subtypes included organisms associated with inflammation and dysbiosis, including Streptococcus, Erysipelotrichaceae, and Campylobacter jejuni. Overall, the microbiome results comparing pre- and post-intervention effects demonstrate a consistent validation of the known microbial species linked with the improvement of symptom scores reported by the subjects. 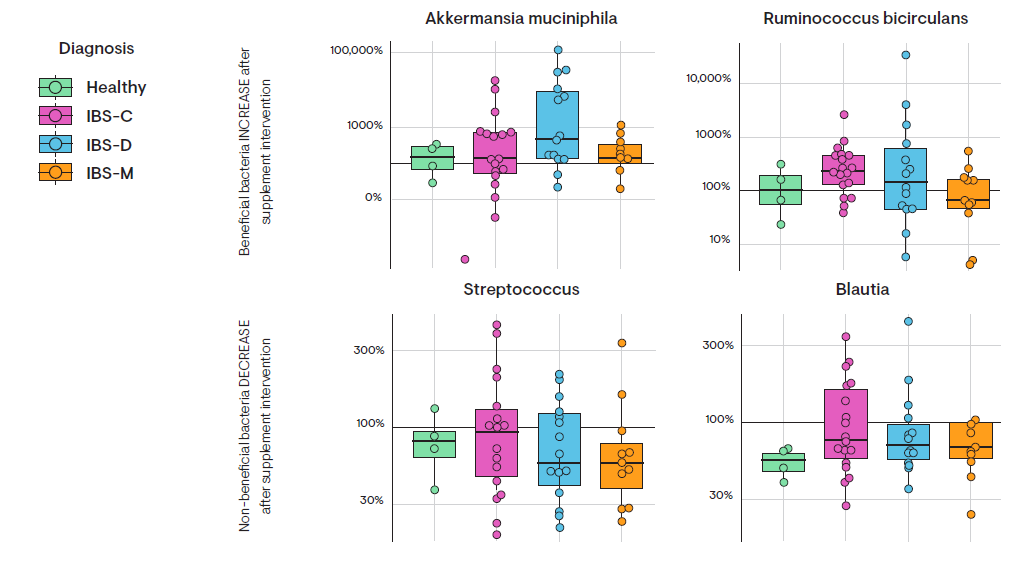 Figures in the publication show biochemical pathways identified. The top pathways found in diarrhea-subject microbiomes were predominated by biosynthesis pathways of nucleotides and fatty acids, whereas constipation subjects had pathways more centered on sugar and amino acid metabolism. As expected, the pathways that showed the greatest shift were often linked with the predominant pathways. For instance, IBS-D had increases in anaerobic metabolism and the citric acid cycle and decreases in nucleotide (CDP-diacylglycerol) biosynthesis, whereas IBS-C showed decreases in sugar (GDP-mannose) biosynthesis and amino acid (L-glutamine) biosynthesis.

Metagenomic sequencing is advantageous because it can examine sequence reads that align to eukaryotes, specifically the human host. This trial found human DNA content from stool samples can be detected at significantly elevated levels in active flare-ups for IBD, and to a lesser extent in IBS, congruent with other IBD datasets.

This study suggests that metagenomic characterization that includes bacterial taxonomic and functional pathway profiling showed strong signatures that can be used to separate phenotypes. The improvement in symptom score appears to be driven partly by a supplement regimen in concert with dietary recommendations. Overall, the 30-day intervention period demonstrated an improvement in symptom scores, a finding further supported by the shifts in microbial composition between the baseline and endpoint microbiome analyses.

We encourage you to read the full publication and discussion to the current literature, view figures, and supplementary files, and understand the limitations of this study. Thorne and Onegevity believe more research is necessary and intend to continue exploring the complex intricacies of the human microbiome related to specific health conditions.

Figures in this post have been adapted from the original publication.