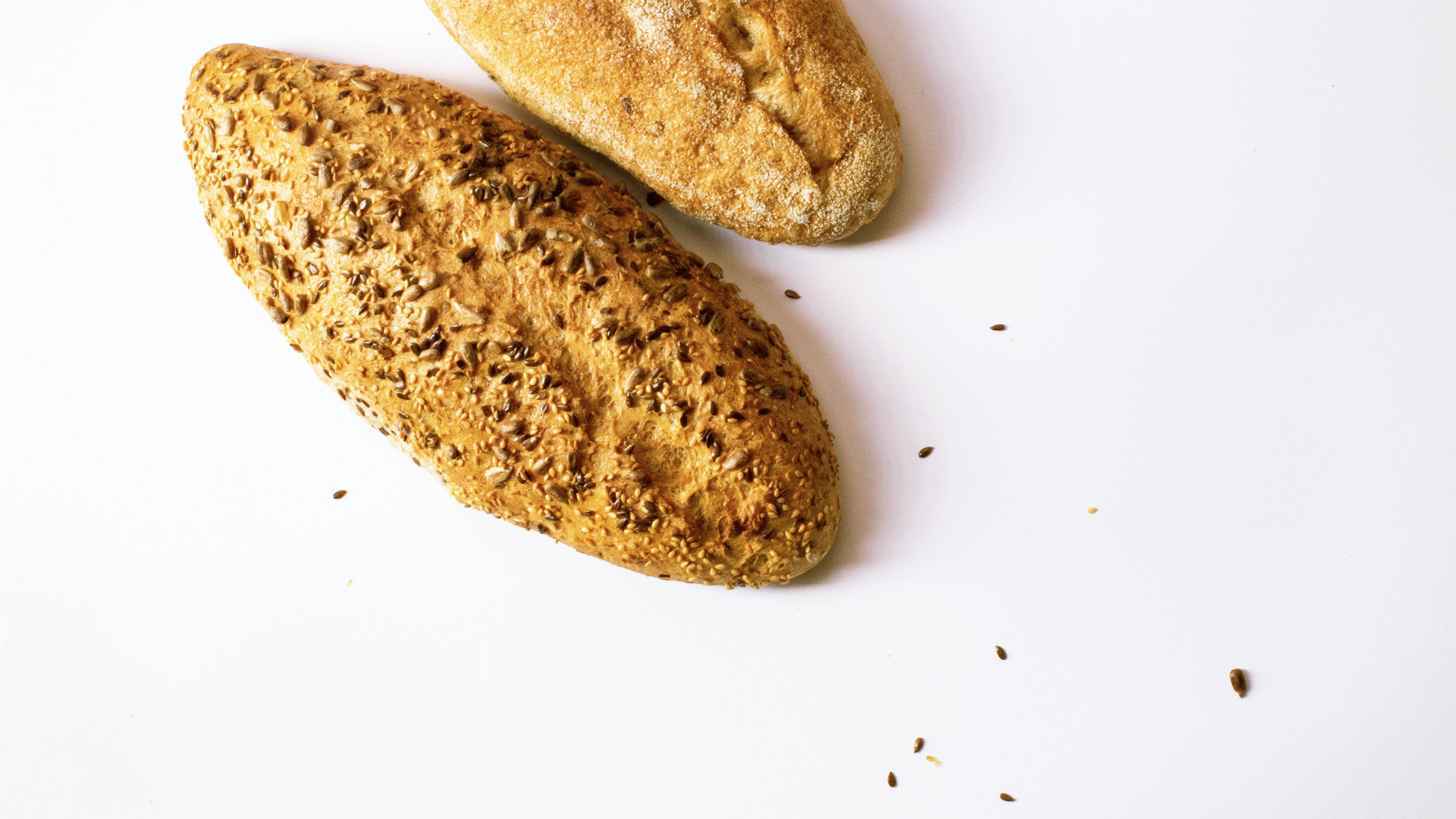 You have probably heard the terms “gluten intolerant” or “gluten sensitive” come up in everyday conversation. Yet, you might be wondering exactly how gluten impacts health and why gluten is such a popular topic. Here we hope to answer some questions you might have – separate the wheat from the gluten, so to speak.

What is gluten and why should I care?

Gluten is composed of two proteins – gliadin and glutenin – that account for the intolerance to gluten that most individuals experience.

Let’s start with gliadin. There are actually four types of gliadin – alpha, beta, gamma, and omega. The first three are related to digestive issues, while the fourth, omega-gliadin, is associated with skin rashes (urticaria) and asthma. It is the gliadin fraction of gluten that individuals with celiac disease react to. Glutenin is less likely to be a cause of disease or intolerance. It is glutenin that makes bread dough strong and elastic – think pizza dough being tossed at your favorite pizzeria.

Gluten is found mostly in wheat, rye, and barley. Gluten can also be found in oats, but not because oats inherently contain gluten; rather, many oats are processed in facilities that also process gluten. In addition, brewer’s yeast is typically contaminated with gluten because it’s a by-product of beer brewing, which involves the gluten-containing grain barley.

Even if you don’t have a serious reaction to gluten, you might find you feel better when you avoid it. If that is the case, then you aren’t alone. Although less than 1 percent of the population has celiac disease, it is estimated that 6-8 percent of the U.S. population has gone gluten-free. A gluten-free diet can often help what ails you, even if gluten is not the culprit, because it eliminates wheat – a primary source of both refined carbs and unabsorbed, fermentable carbs (FODMAPS, which you can read more about here).

Although the way wheat is grown and processed has evolved over the years, the gluten content in wheat appears not to have changed much. So why does bread seem to be making people sicker? For one thing, gluten is often extracted from wheat and then added to many other products, including foods you would never imagine contained gluten. One study several years ago found gluten and other wheat by-products in almost one-third of processed foods in grocery stores.

What’s the difference between gluten intolerance and celiac disease?

If you think you are gluten intolerant, then you can check with your health-care professional who can help you sort it out. You could also try an elimination and reintroduction diet by removing all sources of gluten for three weeks, then reintroducing gluten. The only problem with eliminating just one potential food culprit is that it could be several foods that are contributing to your symptoms. Another option is to eliminate the most common food allergens, followed by a systematic reintroduction. For a comprehensive guide to this approach, check out our MediClear Detox & Allergy Elimination Guide.

Celiac disease (CD) is not the same as gluten intolerance. CD is an autoimmune disorder in which gluten can cause serious, even life-threatening, complications by attacking the cells of the small intestine. In CD, even the tiniest bit of ingested gluten can cause inflammation and damage to the intestinal wall. CD is diagnosed with blood tests that reveal various antibodies your body generates against gliadin.

In general, whether you are dealing with gluten intolerance or CD, symptom severity typically has nothing to do with the amount of food you eat. Therefore, it is important to know that the foods you eat and the supplements you take do not contain hidden gluten.

What does Thorne do to assure products labeled as gluten-free are indeed gluten-free?

Even if a product does not contain an ingredient typically derived from a gluten source (like wheat bran) or one that is often contaminated with gluten (like oat bran), Thorne sends samples of every product annually to an outside lab to verify there is no hidden gluten. The outside lab uses the enzyme-linked immunosorbent assay (ELISA) method to analyze for amino acid sequences that indicate the presence of gluten and gliadin. The ELISA method is approved by several international organizations, including the Association of Official Agricultural Chemists International and the American Association of Cereal Chemists International.

What is the definition of gluten-free?

When products are tested for gluten, a test result of less than 20 ppm (20 parts of gluten per one million parts of the food or supplement) is required to label the product as gluten-free. Why not zero parts per million? Because there is no scientifically validated test that can reliably measure gluten at a level of less than 20 ppm. In addition, the Celiac Disease Foundation and the Center for Celiac Research both endorse the cut-off of 20 ppm as being safe for celiac patients.

What do other companies do?

Individuals who are gluten intolerant can be prone to certain nutrient deficiencies, whether they have celiac or non-celiac gluten intolerance. In the case of celiac disease, the deficiencies can be a result of poor absorption, as well as low intake of the particular nutrient. In the case of non-celiac gluten intolerance, it is more typically related to low intake of the nutrient. Many gluten-containing breads and other grain-based foods are fortified with additional vitamins and minerals – most often B vitamins, iron, and calcium, while their gluten-free counterparts are typically not. Common nutrient deficiencies due to low intake include:

Additional common deficiencies when absorption is a factor include:

Q: Is your L-glutamine safe if I’m intolerant to gluten?

A: We are often asked about our L-glutamine powder or capsules because gluten contains glutamine – and the names are similar. However, L-glutamine itself is not a concern for a person with CD or non-CD gluten intolerance. In fact, L-glutamine is often included as part of a supplement plan for individuals with CD or gluten intolerance because it is the most important fuel for the cells of the small intestine, so it supports a healthy intestinal lining.* Thorne’s L-glutamine products have all been tested to be gluten-free.

A: Although there are several certifications available for gluten, they are not all in agreement as to what constitutes gluten-free. Dietary supplement companies are expected to be able to validate their claims if they identify a product as gluten-free. Thorne has chosen to follow the FDA guidelines, which have also been adopted by the majority of certifying agencies. At Thorne, we have every product tested yearly to ensure it tests gluten-free before we add the gluten-free icon to our labels or product support materials.

Q: Why do some certifications require lower than 20 ppm to label as gluten-free?

A: In addition to the FDA, most certification programs have designated 20 ppm as the cut-off for declaring a product to be gluten free – including the Gluten-Free Certification Program (GFCP). The Celiac Support Organization requires products to be less than 5 ppm, although the Celiac Disease Foundation and the Center for Celiac Research both endorse the cut-off of 20 ppm. It is also questionable whether analytical testing is accurate at a level below 20 ppm, as is indicated by this quote from the FDA.gov website:

“FDA used an analytical methods-based approach to define the term gluten-free and adopted < 20 ppm gluten as one of the criteria for a food labeled gluten-free because the agency relies upon scientifically validated methods for enforcing its regulations. Analytical methods that are scientifically validated to reliably detect gluten at a level lower than 20 ppm are not currently available. In addition, some celiac disease researchers and some epidemiological evidence suggest that most individuals with celiac disease can tolerate variable trace amounts and concentrations of gluten in foods (including levels that are less than 20 ppm gluten) without causing adverse health effects.”

We have tested every finished product for hidden gluten, and they have all tested to be gluten-free.

Next up: Try these gluten-free, no-bake chocolate protein bars