The Training Bundle: Best Supplements to Take While Working Out 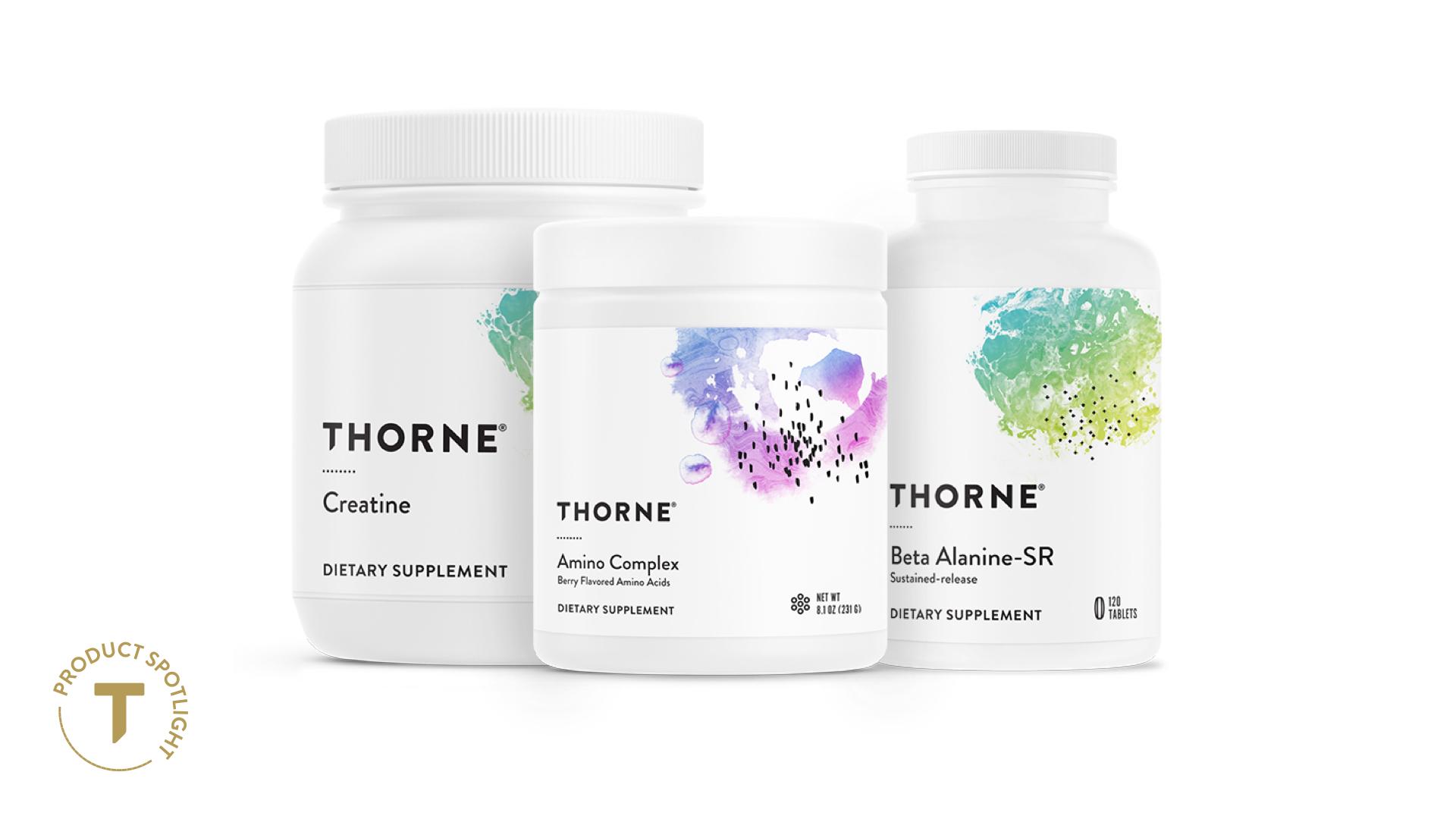 For an athlete, there is nothing like finishing a workout and knowing you gave it your all – and that you’ll be a little bit stronger, faster, or more fit because of your effort.

There are many ways to maximize the benefits of training – from proper form and technique to getting sufficient rest and eating right. But athletes at every level who train hard and regularly and who are focused on results can also benefit by making nutritional supplements part of their regimen.

Thorne has put together a “training bundle” that meets the needs of elite athletes and those who train with the intensity of a champion competitor.

Each product in the bundle is NSF Certified for Sport®, which means the finished product is tested for compliance with its label claims and to ensure the absence of more than 200 substances banned by many major athletic organizations, including stimulants, narcotics, steroids, diuretics, beta-2 agonists, and masking agents.

Amino acids provide fuel and nutrients to the muscles during a workout, as well as promoting recovery afterward. Amino acids are the building blocks of protein and are quickly absorbed into the bloodstream for use in the body.

The amino acid leucine triggers the body to start the recovery process, so having leucine in the blood during and immediately after training maximizes the recovery window, thereby maximizing the workout’s efficiency.

The three Thorne products in the training bundle will help make your time spent in the gym, on the track, in the pool, or wherever you might train, pay off.

1. Creatine is the fuel that muscles need

Creatine, an amino acid naturally produced in the body from other amino acids, is also found in foods such as meats, eggs, and fish.

Bonus: creatine also supports cognitive function.* For athletes, creatine helps the body more efficiently create the energy to engage in exercise.* It plays an important role in the body's production of cellular energy because it helps make ATP, the form of energy used by all cells.*

When should I take it?

For maximum benefit, take Creatine 30 minutes before beginning your workout – or as recommended by your health-care professional.

Studies show less fatigue in cyclists and in 2,000-meter rowing time trials, and improvements in strength in college football players and in sprint performance in endurance cyclists.*

The active ingredient in Thorne's Beta Alanine-SR has been shown to increase carnosine concentrations in muscle.*

Because acidity is a major contributor to muscle fatigue, the presence of carnosine helps maintain a normal pH in muscles by buffering the hydrogen ions created when muscles generate energy.* But carnosine absorption is poor, and it tends to be lower in females and in individuals who limit animal protein in their diet.

Sustained-release beta-alanine supplementation, as in Thorne’s Beta Alanine-SR minimizes beta-alanine’s poor absorption, as well as the tingling sensations often associated with consuming a non-sustained release form of beta-alanine above 800 mg.*

When should I take it?

For maximum workout-related benefit, take Beta Alanine-SR within 30 minutes of beginning a workout – or as recommended by your health-care professional.

The comprehensive blend of essential amino acids in Thorne’s Amino Complex is high in branched-chain amino acids (leucine, isoleucine, and valine), a group of amino acids that have been validated through numerous clinical trials to promote the growth of lean muscle mass and to enhance muscle strength.*

The ingredients in the Amino Complex formula are backed by more than 25 years of scientific and clinical research. Amino Complex comes in two flavors – lemon and berry – is lightly sweetened, it mixes easily with a warm or cold liquid, it has no artificial sweeteners, and it contains flavors only derived from natural sources.

When should I take it?
For maximum training-related benefit take Amino Complex during your workout – or as recommended by your health-care professional.

Although you can get similar supplements elsewhere, Thorne offers the highest quality nutritional supplements with the purest ingredients. It’s good to know we put as much effort into our products as you put into your training.