5 Spices For a Healthy Gut 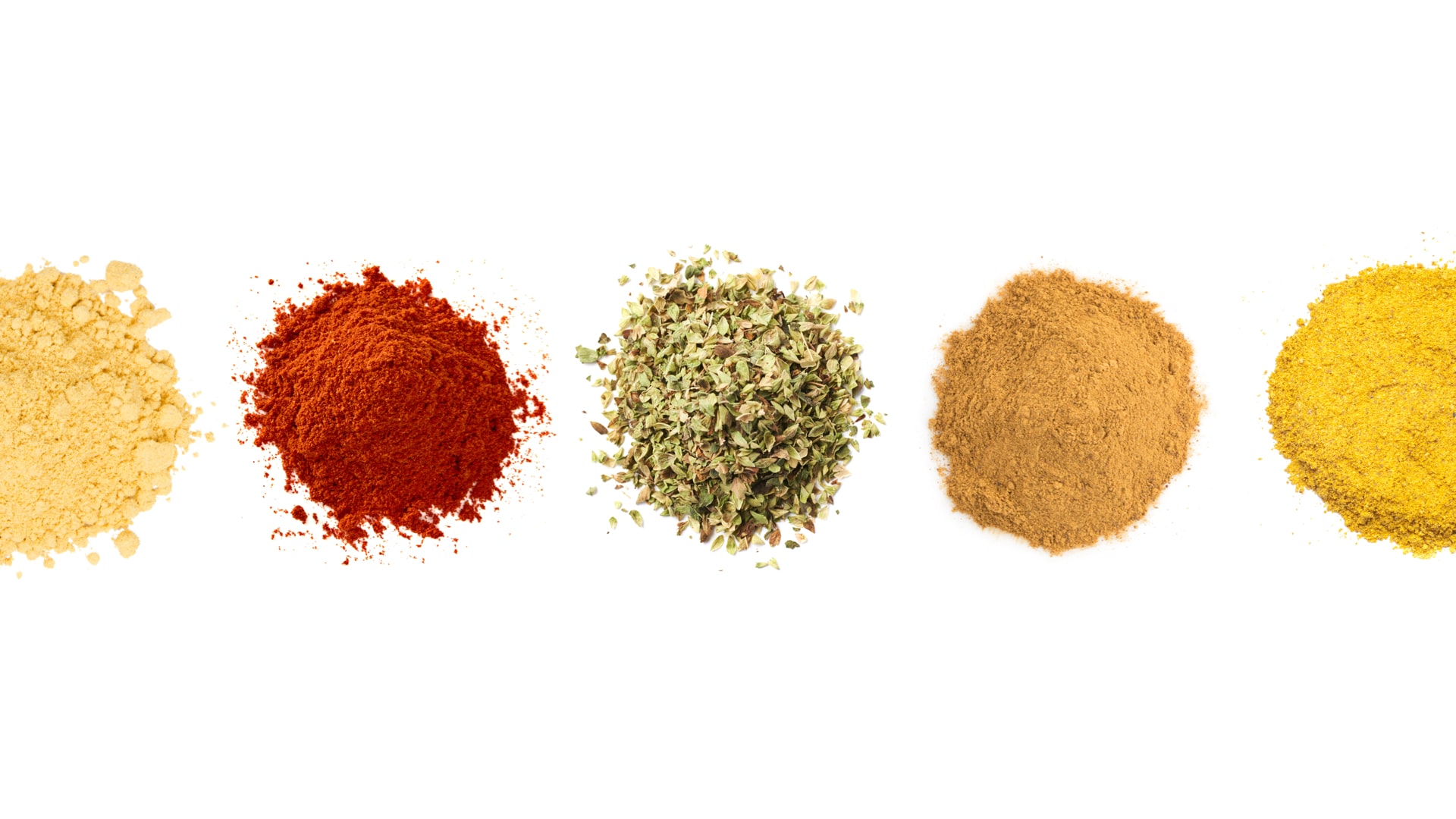 There are many nutritional supplements available that support gut health – probiotics, prebiotics, digestive enzymes, fiber, amino acids, and botanicals, to name the best-known of the major players.

But did you know you probably already have a good start on the medicine chest for keeping your digestive tract happy with what is sitting in your kitchen spice cabinet? Why not make your food work for your gut instead of against it?

Cayenne pepper (Capsicum annuum) is a popular spice in Mexican, Cajun, Creole, and Asian cuisines – sometimes used fresh, but more often used in the form of dried powder or flakes. On the heat scale, cayenne is a medium hot pepper – hotter than jalapeno but cooler than habanero.

The key word to describe the effect of cayenne on the digestive system is “stimulant.”

Cayenne stimulates the taste buds, which in turn stimulates saliva production. Then, moving on down the digestive tract, cayenne stimulates three more things:  hydrochloric acid secretion in the stomach, pancreatic enzymes from the pancreas into the small intestines, and bile secretion from the liver and gall bladder – all of which aid digestion.1

In a study that examined the effect of cayenne on the growth of bacterial species beneficial to the GI tract, cayenne at various dilutions stimulated the growth of 10 strains of Bifidobacterium and 13 strains of Lactobacillus, including L. rhamnosus GG and L. reuteri.2 Although it was a test tube study (petri dish, to be specific), it is likely that cayenne and the other spices tested would behave similarly in the human gut, essentially acting like a prebiotic – feeding the beneficial gut flora.

Ginger (Zingiber officinale) has been used for centuries as a folk remedy to soothe the GI tract. Although ginger root is used in sweet and savory dishes in Indian, Asian, and Western cuisines, it is in the form of a tea, a juice, or a syrup that it is typically used to soothe the stomach.

Its most notable benefit is alleviating the nausea and vomiting associated with pregnancy, motion sickness, post-surgery, and cancer chemotherapy drugs.

Although it might seem counter-intuitive, one of the ways ginger benefits the GI tract is by increasing the motility of the GI tract, which increases the rate the stomach empties.

You might think that would stir things up and contribute to vomiting, but that appears to not be the case. Rather, it encourages normal intestinal movement while inhibiting abnormal movements like GI tract spasms.

Numerous studies have shown the benefits and safety of consuming ginger during pregnancy. For example, one mega-study that looked at the combined results of 12 other studies – that included a total of 1,278 pregnant women – found ginger was more effective than placebo for nausea and did not result in side effects that can occur with nausea medications.3

Several studies have also found that consuming ginger protects the stomach from ulcer-causing agents, such as aspirin, the anti-inflammatory drug indomethacin, and the bacteria Helicobacter pylori.4

The same study discussed in the cayenne pepper section also showed that ginger increases the growth of beneficial Lactobacillus and Bifidobacterium species – basically behaving like a prebiotic.2

Cinnamon (Cinnamomum cassia) – like several other spices on this list – has powerful antioxidant and anti-inflammatory properties. Although cinnamon is probably best known for its ability to help lower blood sugar, it also has several benefits for the GI tract – according to both folk medicine and current research.

In folk medicine, cinnamon is used for general stomach upset (dyspepsia), as well as flatulence and diarrhea.

How does cinnamon work its magic? It seems that some of its constituents, like cinnamaldehyde, have anti-inflammatory effects. This was demonstrated in an animal study where cinnamon decreased stomach inflammation caused by H. pylori,5 which has long been implicated as a cause of stomach ulcers.

Cinnamon also appears to have antimicrobial effects against the harmful bacteria, C. difficile. In fact, in a test tube study, cinnamon showed activity against 11 toxic strains of this bacteria.2

Taken together, cinnamon appears to exert its beneficial effects on the gut by supporting a healthy balance of beneficial bacterial, while decreasing the inflammatory effects of “the bad guys.”

So next time you’re looking to spice up a smoothie or latte with cinnamon, give the bottle an extra shake or two – and be sure to add plenty of cinnamon sticks to your hot apple cider.

Oregano (Origanum vulgare), also known as wild marjoram, is a member of the mint family and is used liberally in Mediterranean cooking – in sauces, marinades, vegetable dishes, and savory baked goods. It has a long history of use for gastrointestinal complaints, dating back to ancient Greece.

Oregano contains an active ingredient, carvacrol, that is responsible for many of its antimicrobial properties.

One of the most common causes of gastroenteritis from “food poisoning” Is Camplycobacter jejuni. Studies indicate this nasty little bug can be inhibited by ingredients in oregano.

One study discovered it worked by inhibiting the motility of C. jejuni so it couldn’t invade the walls of the intestines.6 Oregano has also been shown to have activity against other bad guys like E. coli and numerous Listeria species. Next time you go to a picnic, try an oregano rub on your chicken (with grated lemon rind, oregano, and olive oil).

Oil of oregano has also been shown to benefit systemic Candidiasis.7 Try putting a couple or drops of oregano oil in your oil and vinegar salad dressing for an antioxidant and antimicrobial dressing.

And while oregano is well-known for its capacity to inhibit the “bad” bacteria, it can also increase the growth of beneficial bacteria.

In that same petri dish study discussed above, oregano supported the growth of 10 strains of Lactobacillus and was the most potent of the seven spices studied for increasing Bifidobacteria.2

Turmeric (Curcuma longa) is a spice commonly used in Indian cuisines – like curries, tikka masalas, and tandoori chicken. The curcuminoids in turmeric provide many of the health benefits attributed to Indian dishes – primarily their anti-inflammatory effects.

But the whole herb turmeric has numerous other constituents, and they’re not prone to destruction during cooking.

When the volunteers ate the curry with turmeric, they experienced faster bowel transit time than when they ate the curry without turmeric.9 This suggests eating turmeric can benefit individuals with constipation.

So here’s your challenge: have some fun with these spices and see if you can come up with a tasty recipe that incorporates all five spices in one dish.

How healthy is your gut?

To find out what makes your gut tick, check out Gutbio™, an easy, at-home test that uses cutting-edge microbiome sequencing and artificial intelligence to decode the perplexity of your gut and bring you answers. All from a simple home test.